Here is an article that was recently published on Manganese. As you will see in the article, it is no longer just an aesthetic concern.

Not be confused with magnesium, manganese is a silver-colored metal that is somewhat like iron in its physical and chemical properties. It is the 12th most common element on Earth. Although it is never found as a pure element, it exists as a component of several types of minerals. Approximately 500,000 tons of manganese are used annually in the U.S., as it is necessary for the production of steel. Manganese compounds also are used in the production of batteries, ceramics, pesticides, fertilizers and in dietary supplements.

This mineral is nutritionally essential for human metabolism, bone development and collagen production during wound healing. It plays a role in the detoxification of ammonia, glutamate and free radicals. Deficiency in humans is rare due to its abundance in food and the human body’s ability to increase the rate of absorption when needed. Deficiency only occurs when the amount of manganese available is restricted unintentionally.

Absorption of manganese is tightly regulated in the small intestine and liver. Reduced liver function leads to increased absorption and higher manganese levels in people with chronic liver disease, as well as in infants, who may not have fully developed livers shortly after birth. The intestinal regulation can be circumvented via inhalation of manganese, in which case it can be absorbed through the lung tissue into the circulation and also directly into the brain through the olfactory bulb in the nose.

The human manganese overload syndrome, manganism, was first recognized in the setting of chronic inhalational occupational exposure to manganese dust in welders and smelters. Brain tissue cannot release manganese as quickly as other organs and thus manganese accumulates in the brain areas responsible for initiation of movement, impulse control, and the ability to foresee consequences of actions.

Iron and manganese share the same absorption mechanism, and when iron levels are low, manganese absorption is enhanced. Thus, dietary exposure to manganese during pregnancy is important because pregnant women tend to become iron-deficient. That iron deficiency results in increased manganese absorption and subsequent increased manganese delivery into the brain. Developing babies have a more permeable blood brain barrier, resulting in increased transfer of manganese into the brain and subsequent neurotoxicity. Manganese plays an important role in childhood brain growth, but exposure to higher levels of the element can damage brain development and impair motor skills and memory.

Manganism was the first recognized syndrome of manganese toxicity. The condition clinically resembles Parkinson’s disease. Symptoms include paucity of movement, muscle tremor, rigidity, impaired speech, and slowed reaction time. These also can be accompanied by psychiatric symptoms such as irritability, hallucinations, nervousness and mood changes.

Manganese in drinking water has been shown to be toxic to humans in the following ways:

Manganese can be found in groundwater aquifers from soil erosion and fractured bedrock. Areas with mining or manganese storage can get it throughout the local area as dust spreads on surfaces or into water.

Manganese also enters water from manufacturing. A single plant in York County, S.C., for example, discharges approximately 100,000 lb of manganese compounds into the local surface water annually. It also gets into the environment as a result of coal burning to generate electricity and from combustion of the manganese containing fuel additive methylcyclopentadienyl manganese tricarbonyl, which replaced lead as an octane booster.

The EPA level of 50 ppb is a secondary maximum contaminant level (MCL) based on the appearance and taste of water, rather than safety, so there is no enforcement requirement attached to it. As an example, Greensboro, N.C., residents complained about brown, golden-colored water that tasted terrible and stained fixtures in November 2017 and it was found that the source was manganese contamination from a local reservoir. News agencies ran the story and assured people that the manganese in their drinking water was safe.

Public health source websites claim that manganese in water is not absorbed through the skin during bathing and is thus not hazardous unless ingested. That is incorrect. Showering produces aerosolized manganese in particles the same size as those produced during the smelting process in manganese production (2.5 μ to 10 μ) allowing manganese direct access to the bloodstream via the lung tissue and the olfactory. This explains the observed paradox that manganese in drinking water produces effects associated with toxicity, but a high-manganese diet generally does not.

EPA currently has four recommended analytical methods for the analysis of total manganese in drinking water. These are laboratory methods requiring a trained technician and expensive test equipment. Colorimetric methods for measuring dissolved manganese in drinking water are commercially available for rapid detection of manganese in the field or to aid treatment plant operators. Standard Method 3500-Mn B is a colorimetric method based on persulfate oxidation of dissolved manganese in the presence of silver nitrate. The downside of this method is that other metals and organics can interfere and affect accuracy.

Alternatively available is a proprietary product that utilizes a modified PAN method along with ascorbic acid and alkaline cyanide in an immobilized state, which eliminates the use of hazardous wet chemicals, contains no offensive fumes and eliminates most test interference.

Manganese levels should be tested when new wells are constructed and at a minimum annually. More frequent testing may be indicated in areas with higher environmental manganese levels and in shallow wells since manganese occurs more commonly in those wells as opposed to deeper wells, which are more likely to harbor arsenic.

Treating elevated manganese in drinking water generally requires oxidation of manganese to a solid form, followed by filtration. This form of treatment is ideal for manganese concentrations greater than 0.3 mg/L (300 ppb). During this process, an oxidizing chemical, often potassium permanganate, chlorine or ozone, is injected in a pipeline from the well. Once oxidized, manganese becomes solid particles and can be filtered and removed via media, membrane or biological filters.

Did you know that we are a dealer of Hellenbrand Premium softener salt? We...

Nitrates are a common contaminant in the Lancaster County area. If you are maintaining...

Hard water in your home

Did you know that hard water is not just affecting the suds when washing?... 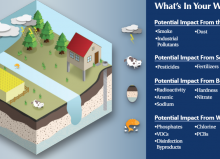